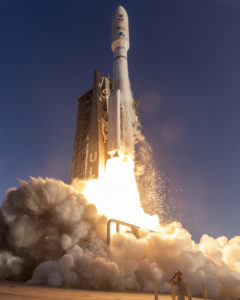 Royal Engineered Composites supported the United Launch Alliance (ULA) launch of NASA’s Mars 2020 mission, which boosted the Perseverance rover and Ingenuity helicopter on their way to the red planet. Royal’s components for ULA’s Atlas V launch vehicle also have enabled the company to launch a range of other missions, including a prior Mars mission.

“We have been proud to support ULA and NASA on a variety of missions,” said Dave Arnold, president of Royal Engineered Composites. “We supported the launch of the Curiosity Rover back in 2011 and were honored when they came back to us to support this latest mission. It’s not every day that parts we make in Minden, Nebraska help launch something to another planet.”

The parts made at Royal for the launch of the Mars 2020 mission were part of the environmental control system.

“The ducting components we manufactured helped to keep the payload, which in this case was the rover, cool while it sat on the launch platform in Florida. They were expended along with the nose cone of the rocket after it exited Earth’s atmosphere.”

ABOUT ROYAL ENGINEERED COMPOSITES, INC.
Royal Engineered Composites, based in Minden, NE, is a fully integrated manufacturer of advanced composite structures for the aerospace community. With customers in the commercial and defense sectors, Royal Engineered Composites offers a full line of services from design and prototyping to full scale production. For more information, visit RoyalComposites.com.

ABOUT UNITED LAUNCH ALLIANCE
With more than a century of combined heritage, ULA is the world’s most experienced and reliable launch service provider. ULA has successfully launched more than 135 missions to orbit that provide Earth observation capabilities, enable global communications, unlock the mysteries of our solar system, and support life-saving technology.

For more information on ULA, visit the ULA website at www.ulalaunch.com, or call the ULA Launch Hotline at 1-877-ULA-4321 (852-4321). Join the conversation at www.facebook.com/ulalaunch, twitter.com/ulalaunch and instagram.com/ulalaunch.